CardioMender, MD recently conducted an internal study on new patients who had NO prior history of Type-2 Diabetes, Pre-diabetes, or insulin resistance. Our results were shocking!

The majority of patients had an abnormally high Hemoglobin A1c (HbA1c), a blood test used to identify Pre-Diabetes and Type-2 Diabetes.

The HbA1c is a simple blood test that does not require fasting when obtained. If above normal, it identifies the presence of insulin resistance which, if left unchecked, is a root cause of Type-2 Diabetes and many common life threatening, but potentially reversible, illnesses.

What is Insulin Resistance?

Insulin is a hormone produced by the pancreas whose primary function is to regulate blood sugar. Increasing belly fat leads to the occurrence of insulin resistance, an impairment of insulin function, in those susceptible to it. Initially, the pancreas produces more insulin in an attempt to control blood sugar. However, increasing insulin levels impairs our ability to burn fat and also leads to increased fat production. Thus, the situation snowballs. This puts extreme stress on the pancreas and over time causes the pancreas to “burn out” and fail. When extreme, pancreatic failure requires insulin therapy to control blood sugar, further impairing weight loss and the ability to maintain good health.

The sooner insulin resistance is identified and the belly fat is reduced , the greater the likelihood of reversing its long term consequences, so reversing insulin resistance will help maintain pancreatic function, optimal health and vitality. It will also make weight loss easier to achieve and maintain. The following explains why it is important to prevent or reverse insulin resistance. 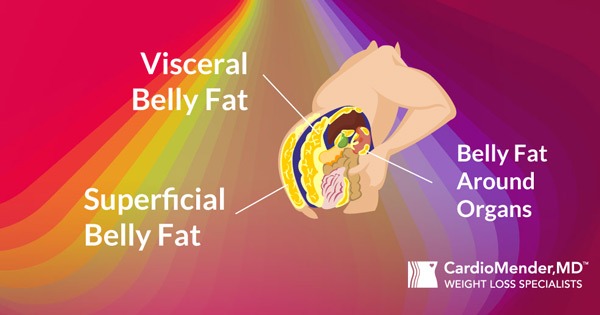 Type-2 Diabetes Mellitus: This is extreme and inadequately compensated insulin resistance. It is associated with increased risk of stroke, heart attacks, kidney failure, pancreatic failure and infections, and is predated by insulin resistant pre-diabetes.

Abnormal Blood Fats: Insulin resistance is associated with reduction in HDL or “Good Cholesterol”, increase in pathologic LDL cholesterol or “Bad cholesterol” and increased Triglycerides which are associated with an increased risk of cardiovascular disease, pancreatitis and other medical conditions.

Metabolic Syndrome: This is a condition comprised of a group of symptoms which increase the risk of, among other illnesses, cardiovascular disease, heart disease, stroke and Type-2 Diabetes. 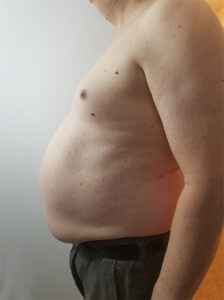 How do you know if you have Metabolic Syndrome?

You have Metabolic Syndrome if you have at least three of the following measurements:

PCOS (PolyCystic Ovary Syndrome):This most common endocrine disorder of pre-menopausal women2 is thought to be preceded by the development of insulin resistance.3 PCOS is associated with decreased fertility, irregular menses, increased testosterone, acne, increased body hair and the presence of ovarian cysts.

Non-alcoholic Fatty Liver Disease: Insulin resistance increases the risk of fatty infiltration of the liver which can lead to permanent liver damage, including cirrhosis.

Insulin resistance hinders the ability to burn belly fat and fat in general. Therefore, the challenge is to be able to lose weight, burn fat and better control blood sugar levels, all while the body itself is interfering with the capacity to do so. But it is possible!

CardioMender, MD Weight Loss Specialists deals with cases of insulin resistance every day. All of our New Patient visits and Restart visits now include blood tests for an HbA1c and a comprehensive metabolic package. Have us identify your risks and help you safely achieve and maintain a healthy weight and optimal health!

Learn more about How to Lose Belly Fat in our three-part series. Click here.

Read about two of our solutions, CardioMetabolic Lean and Calcium Pyruvate

You’ve Got to Live It!TM

CardioMender, MD, as our name suggests, is committed to improving your cardiovascular well-being.  We are…

Can I maintain my weight loss over the holidays??

Yes, if you know the nutritional facts about your meal Here is some basic nutritional…

Dieting and Fitness When You're Always Hungry

It's difficult to stay on your diet and maintain fitness when you're constantly hungry. Here…